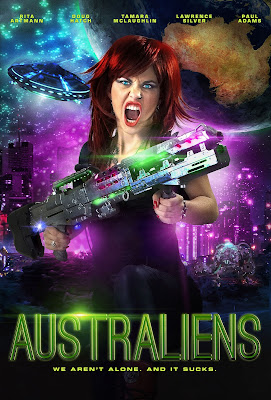 [Looking at the UFO's attacking Brisbane City]Keith:  Bugger me purple.Stix:  This is it, isnt it? The end of the world.Cam:  I never thought the world would end on a tuesday.
There are not too many good sci-fi spoofs out there and I gave up watching many cause they were often really stupid and/or very crude, but I decided to take the plunge and order the DVD of the movie in review especially after seeing parts of the Sydney Opera House being destroyed by a UFO.  The idea of a homegrown alien invasion movie sounded great cause we don’t have many of these (if any) and after watching it I can say that is a very enjoyable film and worth watching.  The acting here is not the best out there but that is no doubt part of the plan to make it a campy, outrageous pile of fun with its Aussie lingo, crazy comments and originality which all adds to the charm of this 112-minute film.  There are references to classic films like ET, Back to the Future, Invaders from Mars, Close Encounters of the Third Kind, Men in Black and no doubt others.

The story begins with the main characters in their childhood where 10-year-old Andi (Natasha Baynham), who believes in aliens, sees a UFO but naturally no one believes her.  17 years later the aliens come back this time to bring destruction with them.  At this time, an older Andi (Rita Artmann – Assistant Director and Producer) and her friends Cam (Tamara McLaughlin), Keith (Lawrence Silver), Elliot (Doug Hatch) and John (Joe Bauer – Director, Writer, Editor and Special Effects Artist) witness the attack on Brisbane City and decide to take matters in their own hands once they hear that the aliens kidnapped Andi’s mother.

The movie has a familiar over the top feel to it but that somehow suits the movie with its theme and ideas.  For a $20k film (yes, only $20,000!) there are many scenes where the effects look amazing and even the simple backdrops are effective in the way they are displayed.  As we don’t get the funding or exposure as the American film industry, it quite exciting to see an Indie home grown movie of this type and even more so knowing that it has won several awards in America such as Best Comedy directed or produced by a Female, Best Feature in Decatur Film Festival, Best Feature at The Zone sci-fi Fan Film Festival, Best Cult Feature Film at Queen City Film Festival, Best Soundtrack at Galactic Film Festival, Best International Comedy Feature at Buffalo Dreams Fantastic Film Festival and so on.  It also won Best Special Effects at the Sydney Indie Film Festival.  With a number of awards, it’s clear that these young talented filmmakers hit the right note.

There is a reasonable amount some swearing in the film and a scene or two that is not required though I guess in some ways it fits in with another part of the film, which I will not give away, so it’s not really young family friendly.  That aside I’m sure some of our overseas friends might miss some of the things being talked due to Aussie slang and lingo but nothing that a search or two won’t solve.

Personally, I really enjoyed it and found it to be quite a memorable movie and am looking forward to seeing it again.  It’s simply a lot of fun to watch providing you take it how it's meant to be, a spoof.  Whilst I would like to chuck up (lol) a few scenes and have a yarn about them it would in a way destroy the movie for you watching it but we have Elliot who is the clean freak nerd who, as you will see from his younger character, is obsessed with being clean and germ free, Keith the macho man who is the joker also from the very start of the film, Andi who is the more serious down to earth one of the bunch apart from the fact that she believes in aliens and everyone is sick of hearing about her cognitive powers that the aliens supposedly gave her, then there is Cam the documentary filmmaker wanna who is bored with filming Andi’s band (class act lol) but get the opportunity of a lifetime to film the invasion.  Then we have John who…well let’s just stop there shall we ;)   Anyway, it’s a blast of a movie so go hire or buy a copy and watch it!!  Oh, and don’t forget to keep watching at the end of the credits!!  LOL

The DVD reviewed is the Australian release (can’t miss that big rating label slapped on the front) and has a fantastic image in the 1.85:1 aspect ratio with a powerful Dolby Digital 5.1 surround audio.  There are also the following extras:
Overall this is a film that I am sure will gain a cult status and is certainly worth seeing for those who like sci-Fi spoof films (eg. Mars Attacks).  The characters can be over the top but that suit’s the over the top scenario of the film perfectly.  The soundtrack is really good, the effects are good and many scenes are really funny and…it’s Australian!  It's a stellar effort for an Indie film on such a tight budget. Highly recommended.
Movie